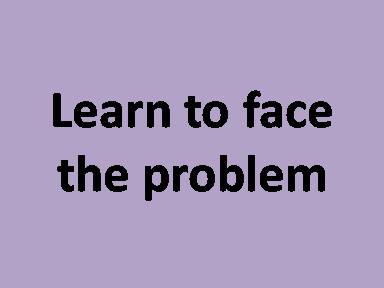 Learn to face the problem, As many people, as many problems, but your perspective is the thing that changes them. During the rains, all birds hide in search of shelter, but the eagle flies over the clouds and dodges the rain itself. Remember, problems in life do not come to ruin us, but help us to take out our hidden abilities and powers.

There are examples in and around history that show that difficulties have never weakened a human, but have led him on the path of glory. Similar circumstances were behind the rise of Marathas in the Deccan region. Surrounded by plateaus and mountain peaks, there was only nominal cultivation. From above, the tyranny of the emperors was not less for Lagaan and other demands, but those inaccessible conditions had hardened those mountains in the bones of the people there. The result is that we all know how he established himself on the chest of powerful Mughals. In recent years, the story of India’s brave daughter Arunima Sinha is also a wonderful example of overcoming difficulties. The criminals threw him down the train when he resisted a robbery on the train. Her leg was instantly cut off as the train came down and she ached painfully between the two tracks throughout the night, but she survived. Liveliness is such that she is the first Divine woman to conquer Mount Everest today. She has also hoisted the tricolor on the seven highest mountain peaks around the world.

Success can only be achieved by not running away from problems. A calm sea sailor can never be efficient. Difficulties enable us to fight challenges.

18 thoughts on “Learn to face the problem”