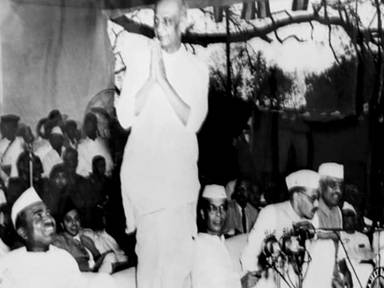 Bardoli agitation announced to increase revenue, It was a major peasant movement that took place in Gujarat during the Indian independence struggle on 12 February 1928. Which was led by Vallabhbhai Patel. At that time the provincial government had increased the rent of farmers by thirty percent. Patel strongly opposed this revenue increase. The government took drastic steps to crush this Satyagraha movement, but eventually it was forced to accept the demands of the farmers. Boomfield, a judicial officer and Maxwell, a revenue officer, investigated the entire case and reduced it to 6.03 percent, denying 22 percent revenue growth. After this Satyagraha movement was successful, the women there conferred the title of ‘Sardar’ to Vallabhbhai Patel.

Edward Munch’s painting ‘Scream’ was first stolen from Norway’s National Gallery on 12 February 1994. It describes the human condition. Stolen twice. In 2012, its second version was bought by Leon Black for about Rs 8 billion 55 crore.

Charles Darwin, who gave the theory of sequence development

Charles Darwin was born in England on 12 February 1809, giving the theory of evolution. From 1818 to 1825, he studied at Shrossbury. In 1831, while traveling on a Beagle ship, he studied organisms and collected specimens. Wrote the first paper in 1837. In 1859 the book Origin of Species was published. Helped to explain the origin and diversity of living organisms. He propounded that those who adapt to the variable components survive. Over the course of several years in which he refined his theory, Darwin obtained much of his evidence from long correspondence from experts. Darwin believed that he could often learn things from anyone and that he exchanged ideas from various experts, such as Cambridge professors to pig-keepers. He died on 19 April 1882.