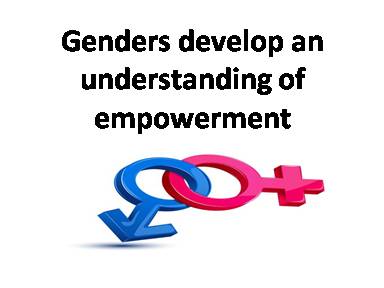 Due to the differential gender differentiation, the gap between the male and female ratio is continuously increasing. In states like Haryana and Rajasthan, this situation has reached an even more dangerous situation. Such differences between boys and girls are not possible in the overall progress of the country. Efforts are being made to end gender discrimination by the efforts of several government and voluntary institutions. The ‘Pradhan Mantri Sukanya Samriddhi Yojana’ run by Prime Minister Shri Narendra Modi is an ambitious scheme which is a major step towards reducing gender bias. Various state governments are also trying in the direction. Prenatal Gender Prohibition (Exchange and Abuse) Act (PNDT Act) which is a legal provision, it needs to be strictly implemented. Gender differentiation in Indian society is a result of the socio-cultural structure here, whose solution will also have to be found according to the socio-cultural structure. Following measures can be adopted to eliminate gender differences.

Strict adherence to the Acts to stop feticide

P.N.D.T Acts and Acts should be strictly followed. For this, a mass movement needs to be set up so that the concerned hospitals and doctors and the guilty parents should be punished severely and punished by imposing fines so that other people can also commit the heinous crime like female feticide. Think again and again. For this, it is necessary that such hospitals and private clinics flourishing from small towns to capitals and metros should be identified, keeping an eye on them and punishing the culprits strictly. For this, NGOs and common man also need to come forward so that this heartless crime can be cleared.

Differentiation of men and women can be eliminated only by awakening the education to the general public. Only by promoting education among the general public, the atmosphere of favoritism regarding gender of children and girls can be removed. Through education itself, the perception can be changed that girls are confined only to the walls of the house. Education makes our thinking broad and broad so that we can change the assumptions made towards girls. Education can make it heartening that boy and girl do not matter, but the actions of the person are important.

Education brings awakening in the society through print media, electronic media, paper media, etc. The declining sex ratio and its side effects can be made known to the society. Decreasing sex ratio will not provide a girl for marriage. Due to this, the family will be incomplete and the qualities of love, kindness, sacrifice and sympathy will also decrease in the society. Adultery, human trafficking, prostitution, etc. will increase in diseases. If the woman is not there, the men will become insignificant, we cannot even imagine the daughter, daughter-in-law, wife, mother, sister because of the absence of the woman, we can reduce gender differences by making the society aware of the above mentioned consequences.

By establishing the rule of fit law

If incidents like rape, sabotage, acid throwing, adultery are committed in the society, parents do not want a daughter, they have a variety of insecurities. If the police and administration keep the rule of law in law in the society, then the number of adultery with women will decrease, people will think a thousand times before committing such a crime. Parents will not have a feeling of insecurity and will not retreat from the girl child. Therefore, insecurity can be overcome by organizing the rule of law in the society. Restrictions can also be imposed on gender-testing in hospitals under the rule of strict law, so that gender differences can be eliminated.

Ban on religious and social beliefs

There are various religious and social beliefs in our society, which gives great emphasis to gender discrimination. People should be raised as a substitute for children in the society and family by creating a mass movement. Recently, in the Gaya district of Bihar, the work of the father’s funeral work and the liturgy was done by the daughters because they had no son. Girls are also unique creations made by God and they are equal to men in every respect. Girls are capable of performing every task and ritual, they cannot be separated from any task. Curtain system, child marriage, widow marriage prohibition, witch system, female feticide should be completely banned. Child marriage can be banned by making the Sharda Act effective. Marriage of girls under the age of 18 should be effectively stopped. Widow marriage needs to be encouraged. For this, the government, non-governmental organizations and common people will have to come forward only then gender discrimination can be eliminated.

By making the girls self-reliant

To end gender discrimination, all political parties need to pass 50% women reservation bill by forming a consensus. Some states have implemented 50% reservation for women in local body elections, this needs to be implemented across the country. Half of seats in government and private jobs also need to be reserved for women. More than caste based reservation, there is a need to provide maximum reservation for women. Employment vocational courses should be provided free of cost for the self-reliance of girls. Vocational courses should be arranged according to the need and interest of women. Economic independence plays a major role in ending gender differences between women and men and this can only be made possible through vocational education.

Improvement in the education system

The current education system should be linked to the real-life needs of the girls. Curriculum should be prepared according to the needs and interests of the girl child. The number of women in the education department should be equal to men. Vocational education should be emphasized for women. Different types of skills should be created, which make girls self-reliant. Every effort should be made to identify the reasons for wastage and blockage in girls. Separate hostels for girls should be properly arranged. Gender differences can be eliminated as a result of the above mentioned efforts.

17 thoughts on “Genders develop an understanding of empowerment”