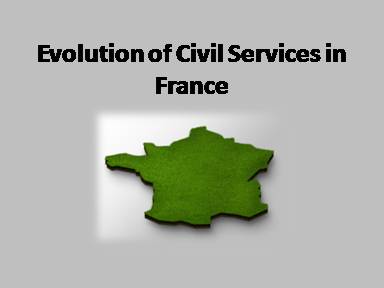 The oldest modern-day class-order prefects were in France. Evolution of Civil Services in France The prefect is the successor of the pre-1789 system of Intendants. Before 1789, the French society was administered by 30 Independents controlled by the king. Each parent was responsible for administering a province (province). In the year 1800, Napoleon established regional divisions in place of the Independents. Each regional division was administered by the prefect. In the mid-19th century, the regional administration was completely taken over by the prefect. He was responsible for peacekeeping, police and election preparations. The administrative power of the project in the Second, Third and Fourth Republics continued to increase and he became an advisor to the cabinet ministers.

Even today the project has special significance in the administrative system of France. Each “department” in France has a prefect who is its administrative officer. He is appointed by the President on the recommendation of the Home Minister. There are two sides to the work of the prefect. First, as a representative of the national government, he is in peace and in the department. Provides for safety. Also inspects, directs and controls tax collection, education, health, traffic, public works and public welfare functions. He is the direct representative of every ministry of the central government and all ministers of the department Is the co-ordinator of the functions of the II. He is the Chief Executive of the Second Local Government and as such he controls all the units of the department and does not appoint officers for the local services of the department and supervise their functions. The administration of Arrondissements and “Communes” is handled by the prefect. Only the prefect approves the budget of the communes and controls the communes’ mayors. Evolution of Civil Services in France In the words of Munro, “The prefect department has the focal point of public fatherhood and an administratively centralized network.” The sub-prefects are there to help the prefect. The biographies of the prefect and sub-prefect are now a regular public servant profession. It is open to graduates of the Ecole Nationale de Administration. The second-order system was introduced by the kings of France, which was approved by Napoleon. Later, democratic and rational-legal administrative elements were introduced by various rulers. In the midst of the historical development of this period, the Parliament was controlled by the King in Britain, while in France a very centralized administration existed.

12 thoughts on “Evolution of Civil Services in France”