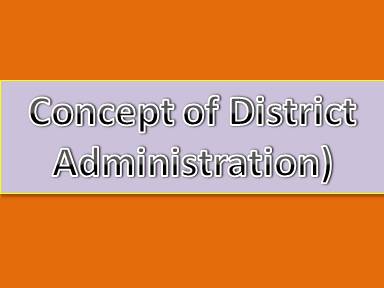 Evolution and Development of District Administration

Originating in the British period

In 1765, the company gained civil rights or revenue collection rights from the Mughals in 1765. The East India Company used to do business with the area it started calling it ‘District’. Later, when the British government started to rule India directly, this administrative unit was not changed, the Collector was appointed as an important officer of this unit. In 1772 AD, Warren Hastings created the post of District Collector for the first time in India. Initially this post was mixed with revenue and law and order, but in 1792 AD, the judicial powers of the District Collector were separated and created the post of District Judge. During Lord William Bantik’s period, the magistrate’s responsibility was separated from the District Judge and included in the post of District Collector and his post was renamed as Collector and District Magistrate.

Initially, the appointment of District Collector was from ‘Covenant Civil Service’, they were given training at Helbury College, England. Later on the basis of the Macaulay report, the Indian Civil Service (ICS) started appointing the Collector. During the British rule, collectors mainly worked for law and order and revenue collection. After independence, district administration remains the main unit of regional administration in India, on which the structure of public administration of India has been laid. As far as the Indian Constitution is concerned, there is no mention of making the district an administrative unit anywhere in it. After independence, there were changes in the goals and functions of the district administration and their scope and responsibility increased.

31 thoughts on “Concept of District Administration”