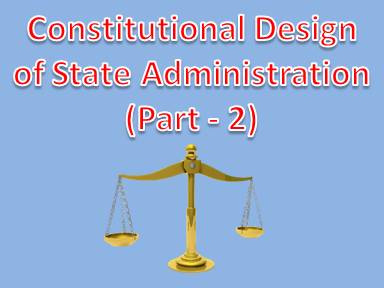 21. Who appoints ministers of the Council of Ministers at the state level – Governor

24. Reserve by the Governor for consideration of the President.

25. Under which provision, the Governor of a state constitutes the State Finance Commission to review the financial position of panchayats? – Under the Constitution of India Article 243 (1)

28. It is the duty of the Chief Minister of the state to make them aware of the decision of his cabinet – to the Governor

29. Under which section of the constitution the Governor can send a bill for the approval of the President – under section 200

30. State Ministers are given salaries and allowances of ministers of councils – from the Consolidated Fund of the state

31. If an independent member joins a party – then his membership ceases

32. The State Cabinet is collectively responsible – towards the State Legislature

33. Who prepares the agenda for the conference of Chief Secretaries headed by the Cabinet Secretary – Central and State Governments

34. Who makes rules for the smooth functioning of the Secretariat of the State Government – Governor and Council of Ministers

36. The Chief Secretary is referred to as the Residual Legatee. This means that – he handles matters not in the domain of other secretaries.

37. Chief Secretary of a state is

38. The job of the Chief Secretary of the state government is –

39. By whom is the officer selected for the post of Chief Secretary? – by the Chief Minister

40. Who presides over the annual conference of Chief Secretaries of all states? – Cabinet Secretary to the Government of India