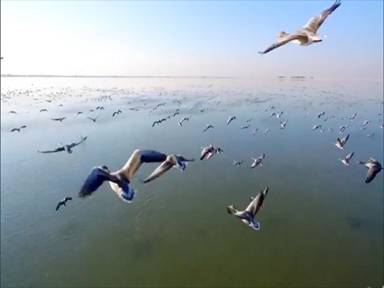 Researchers at the Massachusetts Amherst University in the United States said that atmospheric temperatures and migration times are closely related to each other, the areas that are the most prey to the warming, with birds migrating the most and faster. They analyzed 24 years of radar data from the US National Oceanic and Atmospheric Administration (NOAA) to study migrations of nocturnal birds.

The findings of the study published in the journal Nature Climate Change showed that the number of migratory birds has fallen drastically during the spring season.

Biodiversity will be harmed: Colorado State University (CSU) researcher and co-author of the study Kyle Horton in the US said, “If we talk about the whole continent, the change in birds’ migration times is good externally.” Can. But this change due to global warming can cause problems for biodiversity in the long run. Horton said a change in the timing of birds’ migration does not just mean that migrants are keeping pace with climate change.

Impact on Population: Cornell University researcher and senior author of the study Andrew Franceworth said bird migration has evolved as a response to the changing climate at large. He said that this is a global phenomenon involving billions of birds every year and it is no surprise that the movement of birds tracks climate change. But due to the rapid changes in the climate, the bird population has also been the most affected.

Need to take effective steps: Franceworth said, ‘If climate change continues at this pace, then in future many birds may reach the brink of extinction or become extinct because every creature in our environment only to a extent Can tolerate changes that occur and adapt themselves to it. Therefore, if we have to maintain biodiversity, then effective steps have to be taken to prevent global warming.

One thought on “Increase in bird migration due to climate change”