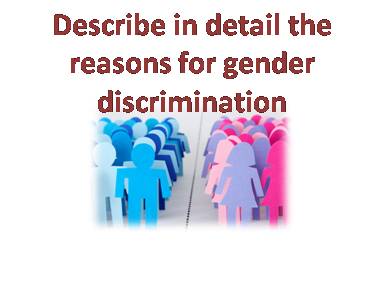 Describe in detail the reasons for gender discrimination

Gender discrimination refers to gender inequality between boys and girls. Prejudice among boys and girls is due to their gender inequality. Often, more attention is paid to the upbringing, education, initiation of children, their health, life safety, prestige, etc. than the girls. There is a belief in Hinduism since ancient times that no one can be free without a funeral rites without a son. On the other hand, the girls have to be protected in every way and they have to leave here by giving donations and dowry. Children are considered to be family pride and family lamp and free from various sins, they are given more support, not girls.

In view of gender bias, the sex of the fetus is determined through ultrasound on a large scale, and the girls are terminated in the embryo if there is no pulping. Even after birth, girls have to fall prey to various types of inferiority, taunts are read. Many inequalities are also visible in reading and writing. According to the report by UNESCO, one crore thirty lakh fetuses are killed every year in India.

How is gender discrimination prevalent in our society?

Variation between men and women – In the modern social system of the whole world, it is universally accepted that today women are not behind in any field and are not free from any point of view. The contribution of women in the present developed India should not be underestimated. Under no circumstances can the contribution of women in the country’s freedom movement be forgotten. During that difficult period of the subjugation of the country, women did many important social works. Aroused consciousness in the country and instilled a sense of revolution in women. But even after all this, the exploitation of women in the country and society continued and continues even today. Although this process of oppression and exploitation of women continues for centuries. But no thinker has tried to think till date, what is the reason for this oppression and exploitation of women. Some scholars have admitted superficially that since most women are employed in unorganized sectors, they are subjected to oppression and exploitation. Rapid technological development in the modern world has not affected the situation of oppression and exploitation of women much more. Therefore, even today, the right of women on the resources available in the family and employment opportunities related to women is very low, but it can be said that due to the development in the fields of agriculture, animal husbandry, fisheries and domestic technology, in the normal state of women While there has been a lot of improvement, there has been some change in their economic condition as well, but even after this, this gap of difference between men and women has increased more and more in the present. For example, the main areas of difference between men and women are currently under literacy, education and training, employment, women’s age, health care and medical services. Women in these areas are more backward and neglectful than men due to the strong tradition of female impermanence, heritage and patriarchalism prevailing in the society and the prominence enjoyed by men. The men still retain their rights in these areas.

The following are the reasons for gender bias –

Our ancient belief is that funerals of parents are not possible without a son. Parents get fulfillment and salvation only from the confession given by the son. Women are not empowered to fire the pyre. Because of this, in the family, relatively more male is given relative importance. Parents also think that only the old age son will take care of their life while the daughter will go to her house with donations and dowry. The family or its family is considered to be the sons of custom, not daughters. It is due to this conservative belief that people remain eager for sons and even kill daughters. There is a belief in our Vedas that a woman should be under the father during childhood, under husband in youth and under son in old age. Thus, the existence, recognition, traditions and protection of women are sacrificed. The most surprising thing is that the mother-in-law, as some women, tortures her daughter-in-law for dowry in different ways and makes a difference in her own children.

Today even in this phase of Zero-tolerance and 4G-5G, our Indian society is full of various social evils and superstitions. Dowry, female feticide, child marriage, widow marriage prohibition, molestation and adultery etc. are such social evils that women are exploited under all circumstances, their number is also decreasing compared to men. Under the dowry system, as soon as the girl is born, the parents indulge in various corruption and illegal methods for her marriage and dowry, so that the money can be collected and dowry should be raised for the marriage of the girl, due to this, people too Do not want children. With the help of technology such as ultra-sound, people determine the child or girl by sex-determination, and even when the girl is a girl, she commits the gruesome killing of the fetus, due to which the problem of sex ratio has taken a formidable form.

Lack of illiteracy and awareness

There is still a large army of illiterates in our country. There is a lot of difference between being literate and being educated. People could not accept that the functionality of man and woman is the same. The two can work together shoulder to shoulder to create a new outline of progress. In the absence of awareness, there is a belief that the work area of ​​women is limited within the boundary of the house. It is believed that there should not be much expenditure in education and upbringing of girls and girls are intellectually inferior to boys. The first right on all goods and facilities is given to the children. The development of girls is not properly managed due to gender bias. First, people engage in the best education of their sons and after this, they think about upgrading and better education of girls. Also, in practice, only boys are made to inherit ancestral wealth, not girls. Uneducated people do not come out of the traditions and superstitions that are going on in families and societies. There is a need that the level of their thinking and awareness can be expanded only if the gender can be saved from discrimination. Only educated and aware persons can understand that both men and women are equally essential for this society. If both work together shoulder to shoulder, then all-round development of the society is possible. Educated and aware people understand that women are not inferior to men in any way.

Right from the beginning of birth, it sits on the mind of women that men are superior to women and women should follow the orders of men. It is put to the mind of women that they have identity and protection from men. There is no existence without man. The most surprising is that women themselves oppose the birth of women and their all-round development. Due to the above mentioned psychological reasons, women accept and follow slavery from the very beginning of life and their development is not complete.

In the coming days, newspapers are full of molestation, adultery, rape, kidnapping, murder etc. of girls. Because of this, the parents here wished that if they had no daughter, they would sleep peacefully. Protective care of girls is also a reason for gender bias. Girls are not considered suitable in the job or in any behavior because they cannot carry out these tasks till late night or outside the house. Therefore, the child is wished instead of the girl child.

The Government (in the Central Government and the State Government) does not give strict punishment to the gender-checking persons. People secretly conduct gender tests in clinics and hospitals and commit female feticide by paying money. The government will have to take drastic action for this only when this heinous murder can be stopped and gender bias can be eradicated. The government will have to come forward to end the insecurity prevalent among women. There are many concrete laws related to this in our country, but there are many difficulties in the implementation of these laws and it is not applicable on the ground.

There is considerable poverty in our country. People believe that male children can play an active role in addressing their economic challenges. On the other hand, women cannot play an active role in economic activities like children. Parents consider girls as alien money and spend a large part of their life’s income as dowry in the marriage of the girl and they believe that they do not have to do this with the boy. In this way people from poor families keep praying to God that they do not have a girl child, this will increase the immense financial burden on them and the other male children will help a lot in solving the economic problems. This is also a big reason why gender bias and gender discrimination are increasing in our country.