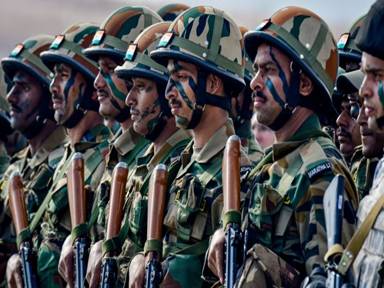 Army is an example of unity in diversity

The year Indian Army celebrates Army Day on 15 January. The day is commemorated in 1949, the day General (later Field Marshal) KM Cariappa took command of the armed forces from the last British Commander-in-Chief, General Sir FRR Butcher, and after independence he became an Indian Became the first Commander-in-Chief of the Armed Forces. The Indian Army has emerged as a professional, non-political and humanitarian army in the last seven decades. No army in the world has the unique experience of fighting at temperatures of minus 50 degrees Celsius Siachen and temperatures of 50 degrees Celsius Thar Desert.

Our soldiers have experience of war in the deserts and plains of the West as well as in the dense forests and ravines in the North-East. Known as Small India, the Indian Army has all the provinces, all ethnic cultures and speaking different languages. The ones are young. They live together, eat together and fight together to maintain the integrity of the nation intact and thus set an example of ‘unity in diversity’. In order to fulfill the religious aspirations of the soldiers, the units have ‘Sarva Dharma’ temples, where the soldiers of all religions can worship according to their beliefs.

Since attaining independence, the soldiers have gained respect in all the battles, while helping the countrymen in natural and human disasters, they have earned their love and gratitude. The Indian Army has also become deserving of a grateful nation in anti-insurgency, anti-terrorism operations and indirect war conducted by Pakistan. The history of the Indian Army has been full of ups and downs. He had to see the darkness of defeat at the hands of the Chinese on the hills of the Himalayas in 1962, but later in 1965 and again in 1971 as the creation of Bangladesh and again in 1999 from the spectacular conquests of the most difficult terrain – Kargil. Woke up.

In Kargil, Indian jawans hoisted the tricolor on the almost straight climbing peaks, uprooted the feet of the firmly frozen Pakistan Army. India has no ambition beyond its borders. Kargil has shown that in the event of any attempt to occupy Indian territory, a joint operation of the Army and Air Force will take place and the Navy will take over the sea and blockade the enemy’s ports. This will be the new strategy of mutual action. Overall, the Indian Army, which General KM Cariappa had prepared, is still to complete the unfinished task of removing the thorns sown by General Butcher.

One thought on “Army is an example of unity in diversity”