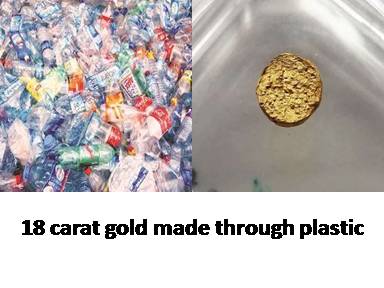 18 carat gold made through plastic

There is good news for jewelery lovers. Now the gold objects of their choice can be very light, without losing their sheen. For the first time in the world, Swiss scientists have made 18 carat gold with the help of plastic. Along with this, it is also quite light in weight. Researchers have used plastic matics to replace gold with molten metal. Researchers at Swiss University have developed a new form of gold. Which weighs about five to six times less than the traditional 18 carat gold.

The study, published in the Advanced Functional Materials Journal, states that conventional mixtures typically contain three-fourths of gold and one-fourth of copper. Its density is 15 grams per cubic centimeter. Researchers Leonie Vant Haig, Rafael Mezenga and their team used protein fibers and telex polymers to make matics. He applied a thin disk of gold nanocrystals to the same matics.

Such prepared gold: According to researchers, gold platelets and plastics melt into a material that can be easily mechanically refined. For this, the researchers first mixed the ingredients in water and then prepared the solution. To convert this solution into a gel, salt was added to it. He then used alcohol instead of water. They then placed the alcohol gel in a high-pressure chamber. The atmosphere of high pressure and carbon dioxide mixes alcohol and carbon dioxide with each other. When the pressure is released, everything changes to an aerogel-like gasomer. After this, heat is used to remove the plastic polymer. In this way the content of the material is changed and it is given the desired shape.

Sound like plastic when falling: According to studies, this gold has physical properties of plastic. If a piece of it falls on a hard surface, it sounds like plastic. However, it shines like gold and can also be polished.